Harried by creditors, ill-health and ‘social hatred’ Shelley took his household permanently abroad, to Italy, in the spring of 1818.
Misfortune pursued them: their daughter Clara died in Venice, their son William in Rome and Mary suffered a nervous breakdown, yet the twelve months from the summer of 1819 saw Shelley’s most extraordinary and varied burst of major poetry. 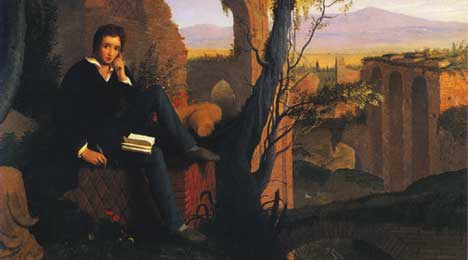 P.B. Shelley in the Baths of Caracalla

He completed Prometheus Unbound, wrote "The Mask of Anarchy", "Ode to the West Wind", the satirical "Peter Bell The Third", his long political odes, "To Liberty" and "To Naples", the "Letter to Maria Gisbourne" and "The Witch of Atlas". Much of this work was inspired by news of political events, which also produced a number of short, angry, propaganda poems, including "Song to the Men of England" and "England 1819". He also wrote several pure lyric pieces including "To a Skylark" and "The Cloud".