In December 1941, on the breakdown of relations between Germany and its allies and America, the Keats House entered its  "underground period", assuming an anonymous obscurity even in its outward appearance. The external plaques were removed and the House became another unexceptional feature of the architecture of the Scalinata.

Though the celebrated library of 8,000 volumes remained in place, two small boxes were sent to the Abbey of Montecassino on December 14 1942. Their contents included the famous last drawing of Keats by Severn, two first editions of Keats - Endymion and Lamia, Keats's own drawing of the Sosibios Vase, locks of Keats's and Shelley's hair, and letters of Shelley, Byron, Leigh Hunt, Trelawny, Mary Shelley and the Brownings. The boxes were sealed but were left unlabelled and it was this omission which ultimately saved them from German inspection.

Following the allied landings and Anglo-American advance Cassino became the centre of the German defence. On October 1943 the Abbey’s archivist Dom Mauro Inguanez, fearing that a serious battle was imminent, moved the treasures of the Keats-Shelley House to his own cell and crated them with his own possessions. On October 30th the archivist's belongings travelled by lorry for Rome and one month later the Curator of the House collected the boxes and returned them to their home in Piazza di Spagna. The Abbey was obliterated by allied bombing in February 1944.

Following the arrival of the Allies in Rome in June 1944, the House was at once reopened and the boxes of manuscripts unsealed in the presence of the British and American Ambassadors. The House was crowded with soldiers who came to reflect and to recover. The father of one of these soldiers wrote later that his son had found there serenity and strength amid a sorrow like that of Ruth:

Ode to a Nightingale, John Keats 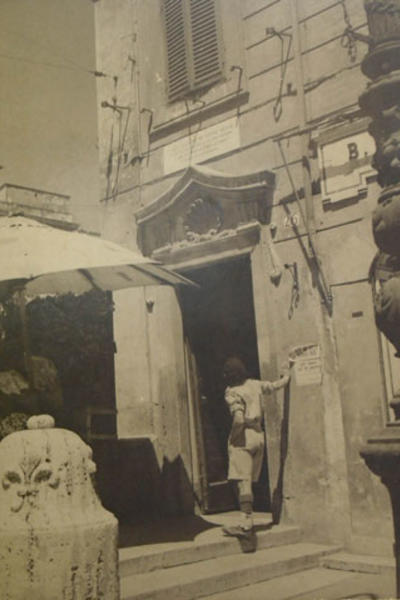