Lyrical Ballads, a collection of Wordsworth’s and Coleridge’s poetry, is generally considered to be a landmark of Romanticism, a book which marked the beginning of a new literary age. In publishing the collection the poets hoped to overturn the staid and priggish style of poetry common to the 18th Century, and to usher in a new age of poetry accessible to the common man. In order to achieve this the poets experimented with the vernacular, and examined the lives of simple country people as their subject. This presented a dramatic shift from traditional literary topic to a subject found in modern literature.

"Tintern Abbey" is the last poem found in the collection, an appropriate position as the work describes Wordsworth’s emotions as he looks back to the past and remembers his visit to the Abbey five years previously. The overriding sentiment of the work is Wordsworth’s faith in the restorative powers of nature, which emerges as he describes the development of his own love of nature. 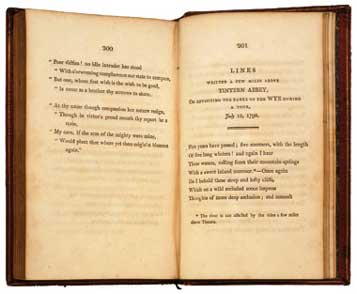