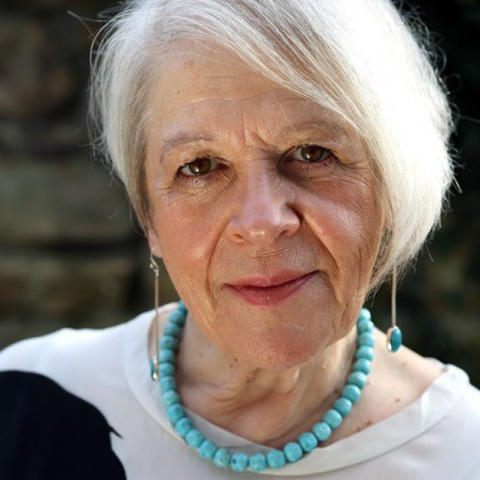 Join us on Thursday 23 June at 6 p.m. as Scottish poet and playwright Liz Lochhead will be reading from her latest book, "Una scelta," recently published by Argolibri in a bilingual version (English and Italian). The Italian versions of the poems will be read by Liz Lochhead's translator, Bernardino Nera.

Tickets are free but dvance booking is required.

LIZ LOCHHEAD, Scottish poet and playwright was born in 1947, in Motherwell, Lanarkshire. She studied at the Glasgow School of Art and taught art at schools in Glasgow and Bristol.
Her first collection of poems, Memo for Spring, was published in 1972 and won a Scottish Arts Council Book Award. Her poetry has been published in a number of collections including Penguin Modern Poets 4 (1995). A performer as well as a poet, her revue Sugar and Spite was staged in 1978 with Marcella Evaristi.
Her plays include Blood and Ice (1982), first performed at the Edinburgh Traverse in 1982; Mary Queen of Scots Got Her Head Chopped Off (1989), first performed by Communicado Theatre Company at the 1987 Edinburgh festival; Dracula (1989); Cuba (1997), a play for young people commissioned by the Royal National Theatre for the BT National Connections Scheme; and Perfect Days (1998), a romantic comedy, first performed at the Edinburgh festival in 1998. She translated and adapted Molière's Tartuffe (1985) into Scots, premiered at the Edinburgh Royal Lyceum in 1987, and the script of her adaptation of Euripides' Medea (2000) for Theatre Babel in 2000 won the Saltire Society Scottish Book of the Year Award. In her play Misery Guts (2002), based on Molière's The Misanthrope, the action is updated to the modern-day Scottish Parliament.
Her collection of poetry, The Colour of Black and White: Poems 1984-2003, was published in 2003 and a romantic comedy for the stage, Good Things, in 2006.
She lives in Glasgow. She was awarded an honorary degree by the University of Edinburgh in 2000. In 2005, she was made Poet Laureate of Glasgow, and in 2011, became Scots Makar. Her latest books are A Choosing: The Selected Poetry of Liz Lochhead, published in 2011 and Fugitive Colours, published in 2016.

BERNARDINO NERA lives and works in Rome, he has got a university and a PhD degree in Modern Foreign Languages and Literatures (English) and so far he has published several articles including translations into Italian of a large number of poems written by the English Poets Carol Ann Duffy, Jackie Kay, Liz Lochhead, Adrian Henri, Roger McGough, Brian Patten, Jacob Polley, et alt., in renowned specialized Italian magazines and journals, such as Poesia (Crocetti), Englishes (Le Pagine), Testo a Fronte (by Marcos y Marcos), Atelier, Rainews Blog Poesia.
He has also published with Floriana Marinzuli, two collections of poems by Carol Ann Duffy, Estasi, (Rapture), in 2008 for Del Vecchio Editore, and Lo Splendore del Tempio: Poesie d'Amore, (Love Poems), for Crocetti Editore, in 2012. In 2013 he was awarded, together with Floriana Marinzuli, the prestigious Italian national prize "Achille Marazza" for the translation of poetry for C.A. Duffy's anthology, Lo Splendore del Tempio. In 2018 together with Floriana Marinzuli, he translated into Italian Jackie Kay’s collection Fiere (Compagna) for the publishing house Ladolfi Editore. In 2019 together with Floriana Marinzuli, he translated into Italian Carol Ann Duffy’s latest collection of poems Sincerity (Sincerità) for the publishing house Ladolfi Editore. In 2022 he translated into Italian Liz Lochhead’s collection A Choosing (Una scelta) for the publishing house Argolibri.