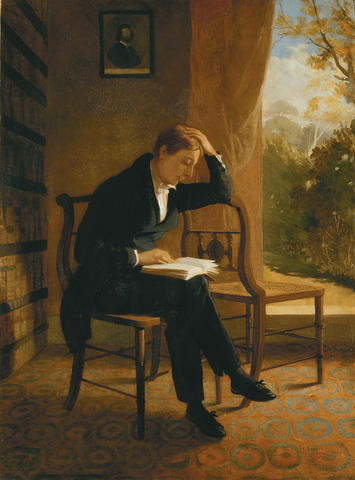 From 1st April, every Wednesday at 12pm GMT/1pm CET we will read a short passage – of poetry, prose, drama, recipe books – in the isolation of our home for, say, 15 minutes.

We simply invite you to join us, from wherever and whenever you are, and read the same text at the same time – alone and together, if you will. If the time zones make this impractical, please feel free to begin at your own particular 12pm. Or even a quarter past. We’re not keeping score.

And that pretty much is that. No preparation. No Zoom hangouts. Oh, and no April Fool. Just a community of readers.

The idea was inspired by John Keats. On 16th December 1818, he wrote from London to his brother George and sister-in-law Georgiana in Kentucky. With letters their only point of contact, the relationship had become essentially literary, conducted through writing and reading rather than speaking and listening.

Keats pondered this question for a couple of paragraphs, before making the following suggestion:
‘I shall read a passage of Shakespeare every Sunday at ten oClock – you read one at the same time and we shall be as near each other as blind bodies can be in the same room.’

Whether the Keatses ever attempted their Shakespearean prayer meeting is unclear. But in an age before times zones, it would probably have occurred four hours apart. Another reason why Los Angeles residents shouldn’t set their alarms for 5am, and those in Sydney don’t have to delay going to bed until 11pm. Unless of course they want to.

By emulating this ingenious plan, we hope to harness reading’s intimate introspection, and also create a Keatsian community across our own various and hopefully temporary isolations.

In honor of Keats’s original idea we will start with Shakespeare, and his Sonnet 44. To read it, please visit the Keats-Shelley Blog.