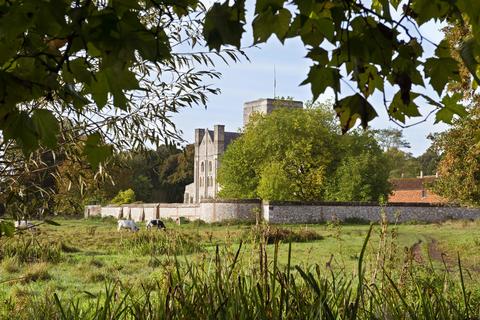 Join poets Stephanie Norgate and James Simpson on a guided walk of Winchester, as they lead you through John Keats's odes and inspiration.

Representatives from the Keats-Shelley Memorial Association and the South Downs Poetry Festival will be joined on the Ode to Autumn walk by the poet Stephanie Norgate. Stephanie’s prize-winning collections include Hidden River and the Blue Den, which explore the relationship between nature and the city and take themes which are lyrical, romantic and topical. Also joining us is poet and naturalist James Simpson who will be reading from Keats’s odes and letters and reflecting on the birdsong and wildlife that inhabit this special place.

The walk will start with a visit to the library of Winchester College where a number of historic manuscripts are kept, there will be the option of visiting Winchester Cathedral at the end of the walk to see where Jane Austen is buried (Jane Austen died in 1817, two years before Keats's visit to Winchester) and the walk will continue past the house on College Street, where Jane spent the last weeks of her life. The walk will then pass into the meadows. The meadows have changed little in the 200 years since Keats walked them. Walkers will follow one of the pure, crystal clear streams of the River Itchen past St Catherine's Hill with its fine vista of the city and on towards St Cross. Like Keats, walkers will see cattle grazing, observe wildlife along the meandering course of the stream and hear birdsong along the route.

During 1819 before consumption took hold, Keats travelled around the British Isles in search of inspiration for his work and it was during this ‘living year’ that he wrote some of his most influential and enduring odes. In the summer and early autumn of 1819, Keats spent time in Winchester walking in the fields and water meadows, enjoying the warm air and the exercise which gave strength to his body. Keats told a friend 'The air is worth sixpence a pint'. On Sunday 19th September, Keats walked through the meadows to the Norman church of St Cross, where he finished the ode, To Autumn. An ode where Keats celebrates the sun-kissed landscape and the workers busy in the fields bringing in the harvest.