This conference celebrates Percy Bysshe Shelley's multifaceted afterlives, exploring the many echoes his oeuvre has produced throughout the history of modern and contemporary literature. The aim of the conference is to craft a map of the poet's seminal influence on single authors as well as on literary movements.

Starting from Mary Shelley's immediate editorial and critical efforts, and passing through both late 19th century Victorian celebrations and Modernist (apparent) rejection, the history of Shelley's fortune is one of the most interesting in modern and contemporary literature, and helps us to reflect on the true essence of his poetic legacy. Robert Browning, Walter Pater, the War Poets, Wallace Stevens, and many other poets were indeed among the most overt estimators of P.B. Shelley's works. Furthermore, his poetical and philosophical lesson has reverberated through the production of authors from around !he globe, not just those in the anglophone world.

Given the Shelleys' fruitful collaboration, especially in their "Italian" years, Mary Shelley's transnational legacy will also be the object of investigation.

Scholars from various parts of the world and fields of study (literature, sociology, anthropology, pedagogy, to name a few) are invited to discuss the wealth of Shelley's aesthetic and ideological legacy, thus creating a forum which will provide a fertile addition to the various events that constellate the Shelleyan bicentenary celebrations.

Suggested topics include, but are not limited to:

• The Shelleys' reception in the Americas;

• The Shelleys' reception in Asia;

• The Shelleys' reception in Africa;

• The Shelleys' reception in Oceania;

• The Role of the Shelleys' oeuvre in the context of other European Romantic movements;

• Adaptations and remediations of Shelleyan character in popular culture;

• P.B. Shelley as a Romantic icon;

• Mary Shelley's role in the canonization of Shelley's figure.

(Department of Philology, Literature and Linguistics, University of Pisa) 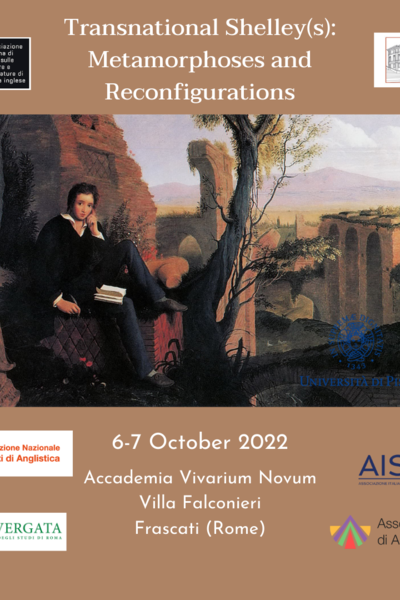