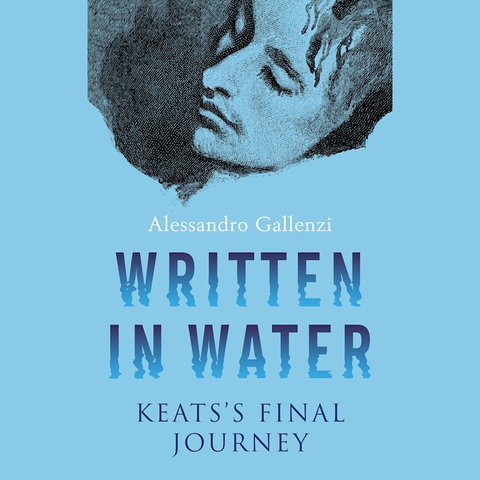 We are pleased to invite you to the launch of a new biography of John Keats: Written in Water, by Alessandro Gallenzi (London: Alma Books, 2022).

The first biography to provide a complete and fresh account of the last five months of Keats's life, from his voyage to Italy to his death at Piazza di Spagna.

Admission is allowed with the normal museum entrance ticket and booking is mandatory due to the limited number of seats (write to info@ksh.roma.it). Please note that the event will be in Italian.

The event will also be broadcast live on our Facebook page.

"Enthralling and original," The Spectator.

On 17th September 1820, accompanied by his friend Joseph Severn, John Keats left London for Italy on board the Maria Crowther in a desperate bid to restore his health. Anguished at the thought of having to part, possibly for ever, from his fiancée and his friends, troubled by money worries and broken in body and mind, the young poet launched on his last journey on earth with both a sense of hope and a deep foreboding that his efforts would be in vain. Despite Keats's own assertion that by then he no longer felt a citizen of the world and was leading a 'posthumous life', his final five months were filled with events of great biographical interest, and deserve to be examined much more carefully.

Using exclusively primary sources and first-hand accounts, Keats's editor and translator Alessandro Gallenzi has pieced together all the available material – adding newly discovered and previously unpublished documents – to help the reader follow the poet step by step from his departure and tumultuous voyage to Naples, through to his arduous journey to Rome and harrowing death in his lodgings by the Spanish Steps in February 1821. The result is a gripping narrative packed with detail and new revelations, one that invites us to strip away the Romantic patina that has formed over the story of Keats's short life, offering a wider picture that enhances our understanding of both poet and man.

Alessandro Gallenzi is the founder of Alma Books. As well as being a literary publisher with over twenty years of experience, he is a prize-winning translator, a poet, a playwright and a novelist. His collection of poetry, Modern Bestiary – Ars Poetastrica, was published in 2005 to critical acclaim. His satirical literary novel, Bestseller, was published in 2010, followed by InterRail in 2012, The Tower in 2014 and Il figlio perduto (Rizzoli, 2018). His verse translation of Alexander Pope’s The Rape of the Lock won the Premio Biblioteca di Monselice special award in 2010. His articles have appeared in many papers and journals, including The Times, The Scotsman and The London Magazine. He edited John Keats’s Complete Poems for Alma in 2019, published a translation of Keats’s Letters ('La valle dell’anima') with Adelphi and, most recently (September 2022), published a biography of Keats's final months in Italy, Written in Water.