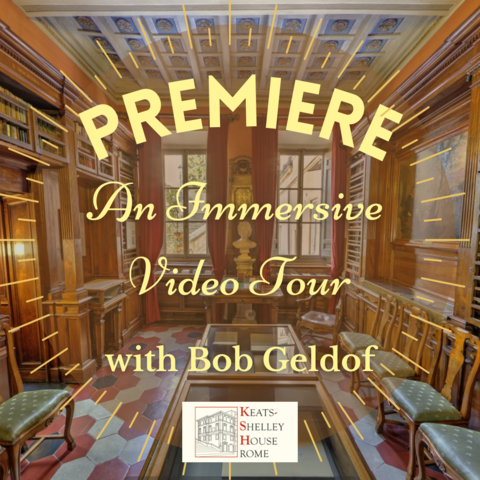 This February the Keats-Shelley House will commemorate the bicentenary of John Keats's death with the release of two immersive video experiences, both of them collaborations with legendary rock star, philanthropist, and Keats-Shelley200 Ambassador Bob Geldof.

On 8th February, an Immersive Video Tour of the Keats-Shelley House with Bob Geldof will be premiered, and will serve as a trailer for the museum and for a series of immersive video stories which will be launched on the anniversary of Keats's death. Best enjoyed with a VR headset, but accessible also in Ultra HD on a regular screen on our YouTube channel and on our website, the tour takes you through the Keats-Shelley House and gives you a sensation of physically being in the museum. If taking the tour on a regular screen you can watch it as a straight video from start to finish, or move around the rooms to explore things that interest you.

Click here to see the premiere of An Immersive Video Tour of the Keats-Shelley House with Bob Geldof from 6.30 pm on 8th February, and follow us on YouTube for more videos.