CLOUDY TROPHIES: a temporary exhibition of works by JEFFREY DENNIS at the KEATS-SHELLEY HOUSE 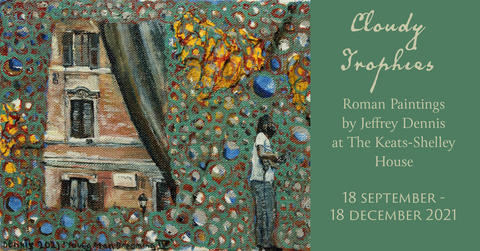 We are glad to inform our visitors that the Keats-Shelley House is hosting a new exciting temporary exhibition of works of art by the British artist Jeffrey Dennis, current Abbey Fellow in Painting at the British School at Rome. The title of the exhibition is Cloudy Trophies and the works have been inspired by John Keats and the city of Rome. In the artist's words:

In 2021 it is two hundred years since the poet John Keats died, aged twenty-five, from tuberculosis, in a small room — now part of Keats-Shelley House — overlooking the Spanish Steps in Rome. It was only three years since he had composed, in the course of a few intense months, his six 'Odes', some of the most luminous poems of English literature.

Amongst his lively and varied correspondence, he had, in 1817, left his thoughts on what he termed Negative Capability, which has been partly interpreted as the capacity to hold conflicting emotions in beautiful equilibrium, thus suggesting an approach to art which may be seen in contrast to the declarative, prescriptive or instructional; refuting 'resting places and seeming sure points of Reasoning'.

Do these briefly sketched thoughts offer an important strategy for constructing an art form which has the capacity to reflect the true complexity of human emotion, acknowledging that we have responses to the world around us that might pull us in paradoxical directions?

I hope that the paintings made in Rome might explore this complexity; reflecting, through layering and adjacency, both some outward aspects of the modern European city as it comes to terms with the impact of a contemporary pandemic, and the legacy of its classical past, which had been such a reservoir of imaginative imagery for Keats, but which he only experienced briefly, at the end of his life.

The exhibition will be on show from Saturday 18th September to Saturday 18th December. Access is included in the standard entrance ticket, and booking is not necessary.

Jeffrey Dennis is a painter and Senior Lecturer on the Fine Art Programme at Chelsea College of Arts and supervisor to Chelsea, Camberwell and Wimbledon research students.
His paintings are in the collections of Arts Council England, British Council, Fondation Cartier pour l’art contemporain, Paris, Leeds Art Gallery, Priseman Seabrook Collection, Stedelijk Museum, Amsterdam, Swindon Museum and Art Gallery, Tate, and private collections worldwide.
He was the subject of a major solo exhibition 'Ringbinder', at the Northern Gallery for Contemporary Art, Sunderland, UK in 2015, and he has been exhibiting internationally since the mid-1980s.
He was selected to participate in the DACS project Art360, developing and sustaining the archives of 100 leading modern and contemporary British artists.