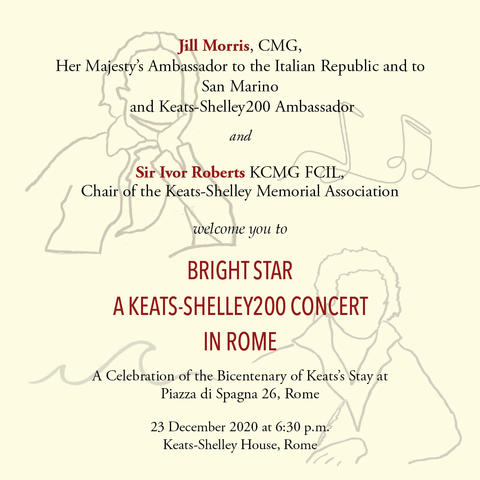 Chair of the Keats-Shelley Memorial Association

A Celebration of the Bicentenary of
Keats’s Stay at Piazza di Spagna 26, Rome

John Keats departed London on 17th September 1820 accompanied by the artist Joseph Severn. The poet was travelling to Italy in search of a better climate as he had been advised that he wouldn’t survive the cold British winter due to his tuberculosis. The journey was long and hard with many aboard their sailing brig the Maria Crowther suffering from sea sickness. When they finally docked in Naples on 21st October 1820, the ship was kept in quarantine for ten days, and Keats was finally able to disembark on 31st October, the date of his twenty-fifth, and final, birthday.

Keats and Severn stayed for one week at the Hotel Villa di Londra in Naples before leaving for Rome. The journey was a week-long carriage ride which was hard for Keats as poor food and lodgings didn’t help his condition. When in Rome the poet and painter took up lodgings at Piazza di Spagna 26, opposite the house in which Lord Byron had lodged in 1817, and close to the place where the Shelleys had stayed in 1819. Keats was to spend the final fourteen weeks and two days of his life in this House.

Keats was cared for till the end by Joseph Severn, who played Haydn symphonies on a rented piano in an effort to lift his friend’s spirits, which is why Hadyn has been included in this evening’s programme. Included too are songs inspired by the verse of Keats and Shelley, which were put to music by twentieth-century composers.

The Keats-Shelley House is a museum dedicated to the second-generation English romantic poets who lived in, and were inspired by, Italy, and housed in the final home of John Keats by the Spanish Steps in the centre of Rome. The House – which has been open as a museum since 1909 and which contains a fine collection of manuscripts, art works and relics pertaining to Keats, Mary and Percy Bysshe Shelley, Lord Byron, and many others – recently launched Keats-Shelley200, a 2-year programme to commemorate the deaths of Keats and Shelley within eighteen months of one another in Italy two centuries ago, and to celebrate their extraordinary legacies.

Born in Vibo Valentia, in 2009 he attended the Accademia Verdiana of Carlo Bergonzi in Busseto. Between 2012 and 2013 he made his debut in the roles of Don Ottavio, Beppe in Pagliacci and Tamino in Zauberflöte. He attended the Accademia Rossiniana in Pesaro and played Count d’Almaviva in The Barber of Seville at the Teatro Petruzzelli in Bari. He actively participates in masterclasses directed by Rockwell Blake, Mirella Freni and Juan Diego Florez. From September 2014 to March 2015 he was a member of the Centre de Perfeccionament Plácido Domingo in Valencia. In 2017 he graduated with honours with special mention at the Santa Cecilia Conservatory in Rome. Since 2017 he has been singing in Viaggio a Reims in Rome, as the Count d’Almaviva at Cadogan Hall in London, Giannetto in The Thieving Magpie at Petruzzelli in Bari, Elvino in The Sleepwalker at Massimo Bellini in Catania and Ramiro in Cinderella by Rossini at Politeama Greco in Lecce. He made his debut at the Teatro La Fenice in Venice in various roles, the last one is the Fox in Valtinoni's Pinocchio. He has performed in many concerts both in Italy and abroad. He continues his musical studies under the guidance of Maestro David Ciavarella.

Giacomo Refolo began studying piano at the age of seven. He studied with Catalina Diaconu from 2011 to 2017 and is currently followed by Antonella Lunghi at the Santa Cecilia Conservatory in Rome. At the same time, he pursued a degree in Translation and Interpreting at the Carlo Bo Institute of Higher Studies in Rome, graduating with honours with a thesis on music and language. In 2013, he won second prize in the International Competition ‘Concentus – Rome’. He has taken part in numerous workshops, such as the ‘101 pianists’ workshop held by Lang Lang in 2011 at the Auditorium Parco della Musica, and in courses held by C. Diaconu, A. Lunghi and Raffaele Napoli between 2011 and 2019. He performed in concerts at the Casa dell'Aviatore in Rome, the Teatro di Villa Torlonia, the Sala Baldini, the Sala Fellini of the Terme di Chianciano, and also abroad, with a recital held in 2017 in the wonderful setting of the Côte d'Azur. Worth mentioning, his musical contribution on the occasion of the concert ‘Remembering Helen Joanne Cox’, in memory of the British MP, held in June 2016.