An autograph letter sent by the romantic poet John Keats to Thomas Monkhouse on 21 June 1818 has been acquired by the Keats-Shelley Memorial Association. The letter has been in private hands for the last two centuries and rarely ever seen in public or by scholars, although it had previously been loaned to the British Library and was first published in 1937. Christie’s New York, who handled the sale, confirm this is the most expensive John Keats letter ever sold at a price of $168,000 USD (circa £131,000 GBP). Sales of Keats autograph manuscripts are extremely rare. The last manuscript in Keats’s hand publicly sold was a fragment from his poem 'I stood tiptoe upon a little hill', sold at auction in 2013 for £181,250 GBP.

Sir Ivor Roberts, Chair of the Keats-Shelley Memorial Association, says: ‘2018 is the 200th anniversary of the writing of this letter by Keats to his friend Monkhouse about Wordsworth. And it is therefore very timely and fitting that we should have acquired this rare autograph manuscript at this time. At the KSMA, we are also looking forward and actively preparing to mark the 200th anniversary of the deaths of our two poets, Keats in 1821 and Shelley the following year.’

Giuseppe Albano, Curator of the Keats-Shelley House, adds: ‘1818 was quite a year for John Keats. He lost both his brothers – one to transatlantic migration and the other to tuberculosis – and met the love of his life Fanny Brawne. It’s also the year he published his major poem Endymion. In the middle of it all stands this letter, penned the very day before Keats set off on his walking tour of Scotland, a trip that would inspire him to write a dozen or so poems and include an attempt to visit his hero Wordsworth in the Lake District. We are thrilled to add it to our collection of English letters and literary manuscripts at the Keats-Shelley House in Rome, where it will be viewed and enjoyed by visitors from all over the world.’

The full text of Keats’s letter to Monkhouse is as follows: ‘My Dear Sir, I regret not being at home when you called the other day - the more because I shall set out tomorrow morning for the North. I was very much gratified to hear from [Benjamin Robert] Haydon that you so great a Lover of Wordsworth should be pleased with any part of my Poem. In hopes of seeing you soon after my return and speaking of my visit to Rydal, I remain, Yours very truly, John Keats.’ (The 'Poem' referred to here is Endymion, Keats's famous poem first published in 1818.)

The letter joins a number of other acquisitions made by the Keats-Shelley Memorial Association in recent years, including Keats’s childhood copy of Tacitus's Orationes Omnes purchased in 2014 with the help of the Friends of the National Libraries, and the earliest surviving manuscript of Keats’s ‘Song: In Drear Nighted December’ in the hand of his friend John Hamilton Reynolds, acquired in 2017.

Keats’s letter to Monkhouse also joins one other autograph letter in Keats’s hand in the collection of the Keats-Shelley House, which also dates from June 1818 and in which Keats writes to his friend the artist Joseph Severn to cancel lunch because he suddenly felt unwell.

For more information on Keats's northern walking tour, you can listen to the BBC Radio 3 Documentary, in which Fiona Stafford recreates the poet’s epic walk of 1818:  https://www.bbc.co.uk/programmes/p06x6rk5 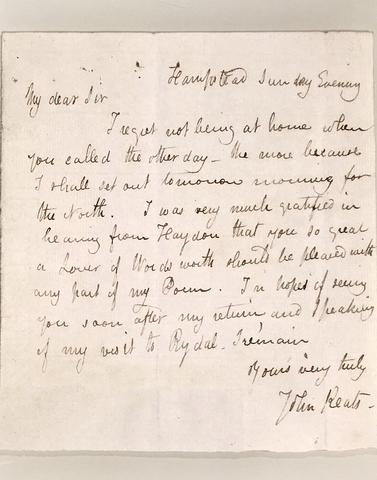