Flowers and poems for Keats

On the morning of 23rd February wreaths were laid and poems were read by the grave of a great poet who died 200 years ago and who will still be read and loved centuries from now. Giuseppe Albano, Curator of the Keats-Shelley House, and Amanda Thursfield, Director of the Non-Catholic Cemetery, were joined by guests including scholar Nicholas Stanley-Price, Andy Devane and John McGhie. A selection of Keats's poems, including Ode to a Nightingale, which came first in the Keats-Shelley House's poll of favourite Keats poems, was read by actor Rory Stuart. For more photos from the occasion see our album: The bicentenary of Keats's death at the Non-Catholic Cemetery. Photographs courtesy of D'Appollonio Photography.

In the morning we also launched a new virtual visitor experience: A Panoramic Tour of the Keats-Shelley House. Visitors all over the world were virtually accompanied by a live guide through the House to explore the rooms of the museum including the apartment where Keats died of tuberculosis in 1821 as well as other rooms dedicated to Percy Bysshe Shelley, Mary Shelley, and Lord Byron. The Online Tour is now part of the main activities of the Museum, and If you are a teacher, group leader, or individual who would like to take an online tour of the Keats-Shelley House in the company of a live guide visit this page for further information.

The day continued with the release of ‘The Death of Keats’ a specially devised poem to commemorate the bicentenary of the death John Keats, written by award-winning British poet and author Luke Wright and commissioned by ArtHouse Jersey in partnership with the Keats-Shelley House. Click here to watch the video.

At 3:15 pm 'Writ in Water,' a new play by long-standing Trustee of the Keats-Shelley Memorial Association Angus Graham-Campbell was broadcast on BBC Radio 4. The work was commissioned by the BBC and produced by Wireless Theatre Co. in partnership with the Keats-Shelley Memorial Association. The cast includes Billy Howle, whose recent credits include leads in The Serpent on BBC television and the films Dunkirk and On Chesil Beach. Callum Woodhouse plays a leading role in The Durrells and is one of the leads in the acclaimed new series of All Creatures Great and Small. This is their debut in radio drama. Click here to listen to the play.

A CGI Keats reading 'Bright Star' from the Keats-Shelley House was livestreamed at 6 pm during an interdisciplinary webinar to mark the bicentennial of the death of the poet. The project was developed by the Institute for Digital Archaeology in Oxford, and the stream included a preview of a Grecian Urn for the 21st century by artist Dan Baldwin, with readings of poems old and new by Scarlett Sabet and UK Poet Laureate and Keats-Shelley200 Ambassador Simon Armitage. Click here to watch the whole webinar.

At around the same time another webinar was being held: 'Conversations on Keats', with British artist Nancy Cadogan whose exhibition 'Gusto' is now on display at the Keats-Shelley House until the end of May. Click here to find out more about the exhibition.

At 6:30 pm 'The Death of Keats,' an immersive video story narrated by Keats-Shelley200 Ambassador Bob Geldof was premiered on the House’s YouTube channel. This video story recounts, through readings of letters by John Keats and Joseph Severn, Keats’s final few months before his death in Rome at the age of 25. Click here to watch the video.

A summary of the day's activities in Rome and interview with the House Curator Giuseppe Albano was aired by RAI, the Italian national public broadcasting company, at 7:30 pm during the news programme TGR Lazio. Click here to watch the interview (only in Italian).

The evening continued with a series of other events.

A Poetry Society event, 'On the Shore of the Wide World: Keats, 200 years on' was livestreamed via Zoom at 8pm. It featured several poets and Keats scholars, with new Keats-inspired poems commissioned from Ruth Padel, Rachael Boast and Will Harris.

At 10:30 pm an online production of 'Lift me up for I am dying' was premiered. This unique performance of a play by UK poet and dramatist Pele Cox first performed at the Keats-Shelley House in 2013 was conducted on FaceTime by the actors, who were all in lockdown in various locations, and shared with the world at the hour Keats passed away two centuries ago. The production was made for the British School at Rome, in association with the Keats-Shelley House and the British Institute of Florence. Click here to watch the play again.

On the day of the bicentenary a video titled 'The Tomb of the Poet' created by the Museum of Rome in Trastevere was premiered. The video recounts how important Rome was for John Keats and other artists and poets, who drew inspiration from the city's cultural and spiritual heritage (only in Italian). Click here to watch the video on YouTube. 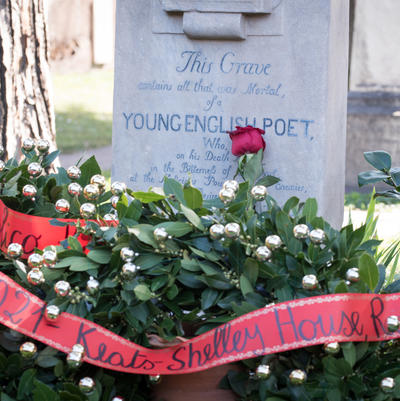